It isn’t a moss but it is Irish. That makes it one better than the Guinea pig, which is neither Guinean nor a pig.

Here is the complete weed on a sea background made of the soft wrappings used by florists to wrap bouquets. 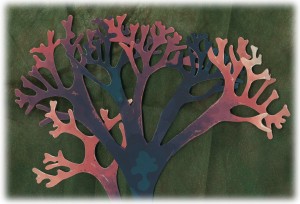 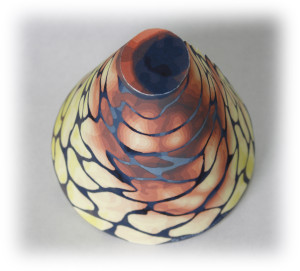 They are poisonous so they need careful handling. In fact they are best not handled. They are found mostly in tropical waters near coral reefs.

The shape and patterns inspired me to design and build this paper model. I feel like I am emulating the work of the Designer (but with far inferior intellect and ability).

More images and information on assembly are available in the gallery at http://www.cysarts.com/?page_id=1081. Enjoy!

I hope to continue adding posts and pages to the galleries once a month so please look forward to the next one on 3rd October. 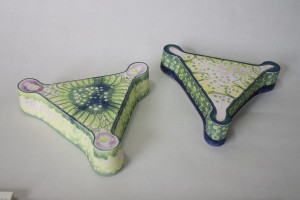 Welcome to my “Projection-Mapped Starfish”.

Despite the name no projection mapping technology was used in its production. Even the mathematics was done on paper with compasses, rulers and pencils.

More may be seen in Galleries; Paper Craft; Starfish… This includes details of the stages of production or secrets of the trade, and also six views of the completed starfish.

I hope to continue with Echinodermata by developing a paper craft model of the Leopard Sea Cucumber. 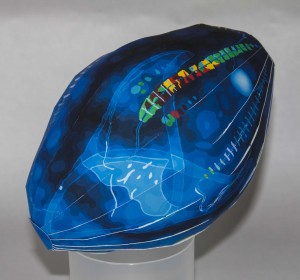 One of my students remarked he could see God’s hand in the Sea Walnut paper craft. I think he was referring to the original creature swimming about in the ocean rather than the craft it inspired.

The Sea Walnut, Mnemiopsis leidyi, is an exciting bioluminescent comb jelly whose natural habitat is the Atlantic Ocean just off the North American seaboard. However it has been hitching a ride in the ballast of ships as far as the Black Sea, wreaking havoc on the local ecosystems and fishing industries by overfeeding on the zooplankton that the fish also feed on. Who could have believed that such a cute tennis ball-sized creature could cause so much trouble?