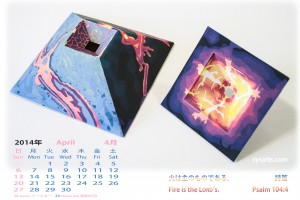 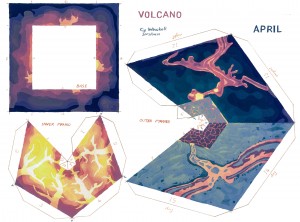 I am pleased to announce the addition of a complete refreshed 2014 calendar. I have finally mastered Photoshop (I hope) and here is the evidence (sample above). In <Galleries> <Calendars> <2014 The Earth…> please compare the images in (3) (Re-refreshed) with earlier ones in (1) and (2).

The next post will be four weeks later on Saturday 12th April. Hopefully I will be able to report on the long-delayed craft book project.

I have mastered Photoshop (partially). The learning curve has been steep. I have discovered the joys of coloured text, soft borders and enhanced photos. Please go to Galleries > Calendars > 2014 “The Earth … (2) Calendar (日本・Japan).

Next week I hope to bring an update on my craft book project. 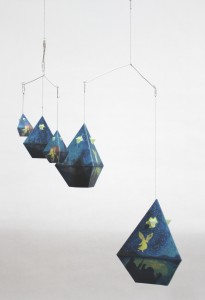 Today I assembled this mobile based on the December design of my calendar for next year, “The Earth All In It Are The LORD’s”.

Please check out “Galleries” “Mobiles” to see other mobiles based on this calendar. On average a mobile takes about three hours to make. They are very relaxing and make great room accessories. They need cleaning from time to time; a lens brush on a rubber bulb is the best device for this purpose.

Have you ever wished you could slightly tweak the font? I couldn’t resist the temptation to do more. This is “Oliver’s Alphabets” taken to new extremes. I doubt you will see a book written in “Cy’s Organic” anytime soon. I suspect the publisher would go potty, to say nothing of the reader. Even so, please enjoy the sheer delight of the dream. See the full set in “Galleries”.

I haven’t forgotten the craft book. John Winskell, a very good friend and I are working on an audio visual collaboration. His site has some great music. Just click http://www.johnwinskell.com/. So as they say, “Watch this space!” Exciting developments are in the pipeline. My next post ought to be on the 30th November 2013. 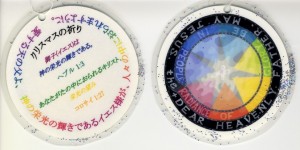 In the last few years prayer has moved to the forefront of my designs — prayer for light and so much more in a darkened world. Some of the cards do appear dark, so the true light can be seen clearly — echoes of Isaiah 9:1,2.

This room completes (for now) the suite “Christmas Cards” in “Galleries”.

Next week on Saturday, 9th November, I hope to introduce one of two exciting projects. The first is my new craft book and the second is a collaboration in sight and sound with an exciting Canadian uncle (actually the grandson of my great-grandfather on my father’s side).

Today I have added a new room to my suite “Christmas Cards” called “1999 to 2006 — The Global Dimension”. It is so named because the Earth appears on several cards, and round things appear on a few others. I hope these works inspire you. 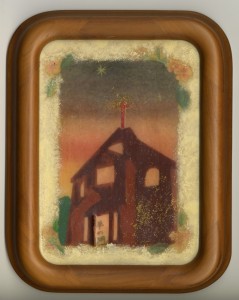 The Sheep’s Gate (1991), decorated and encased in resin by Mrs. Kobayashi

In 1991 a church was opened in Oji Town in Nara Prefecture, Japan. This provided the inspiration for a number of Christmas cards in the 1990s. Most of these cards were designed or fashioned by my family, not just myself. You may notice the impress of my beloved’s style in particular. As such they are more properly copyrighted “Winskells in Japan”.

On of the recipients took her card and gave it the honour of special treatment (above). Below is one more of her treated cards. 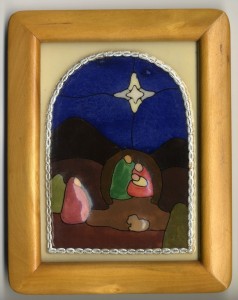 Nativity 1989, decorated and encased in resin by Mrs. Kobayashi

Next week, on 26th October I hope to add a third room to the Christmas card suite, focussing on the Earth as motif. 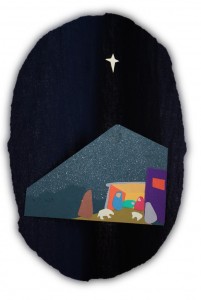 What? Christmas! It’s only October. Most of us haven’t even done harvest thanksgiving.

True, but I hope you enjoy my Christmas card selection, starting with a gallery called “1982 to 1990 Early works” featuring my experimental works from way back in the 1980s.

I have also just reorganised “Galleries” into just three suites “Calendars”, “Christmas Cards” and “Global Thinking”. There are now seven rooms for the seven calendars. There will be four or five rooms once I have added all my cards. Global Thinking is just one room right now. It will have to be reorganised into a new suite called “Style Development” probably next month.

You might be tempted to click on “Shopping” the one commercial button on the site. I’m still working on this part of my life, so patience please. Don’t expect cyberspace mugging, yet.

Global Thinking A, B, and C

“Global Thinking” is a series of four paintings showing twelve views of the earth at 30-degree intervals. The issue being highlighted is, of course, climate change or global warming. I used data from the year 2003. That was a dramatically hot year especially in Australia (reddish-brown in the painting) and Europe.

Since entering the 21st century the surface temperatures of the earth have shown no overall increase. Even so scientists are concerned. They are on record at the United Nations for claiming with 95% certainty that we humans are primarily responsible for climate change. How can we reduce our ‘carbon footprint’? In other words, how can we mitigate the impact our lifestyles have on the climate, especially in our use of fossil fuels?

Sir John Houghton, an important meteorologist, in his book “Global Warming, The Complete Briefing” (link to a recent edition here:-

offers timeless advice on the theme of ‘stewardship’ in his 8th chapter “Why should we be concerned?” If we humans could see ourselves as tenants rather than landlords we might make better progress in leaving a better world for our children. Guess who I think the real Landlord is…

Please enjoy the entire series in the gallery “Global Thinking”. While in “Galleries” you can also enjoy the seven other rooms which house works for seven calendars right up to 2014’s, named “The Earth and all in it”.

Next week, on 12th October, I hope to introduce my Christmas cards, starting way back in 1982. 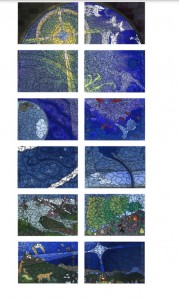 Today I have added a new gallery featuring works painted for a calendar for 2012 titled “Praise the Lord” based on Psalm 148. Below is the “Window of Praise” featuring all twelve works in miniature. I would love to see a stained glass craftsman fashion this in actual stained glass.

The window features the panoply of creation giving praise to their Creator, the LORD, starting with the heavenly hosts and culminating in humankind with the birth of our Saviour.

Next week, on 5th October, I move away from calendars to address the issue of climate change. In view of the recent dire warnings from the United Nations’ panel on climate change, I consider this timely.