The triptych ‘Journey to the Sun’ was completed in August 2006, two weeks before Pluto lost its planetary status, much to the chagrin of the artist.

The other nine works were painted in 2008.

Together, the twelve works made a rather delightful calendar in 2009.

The bird represents the Spirit of God hovering over the ‘surface of the deep’ immediately before God’s creative acts. 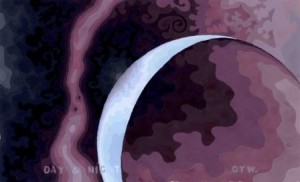 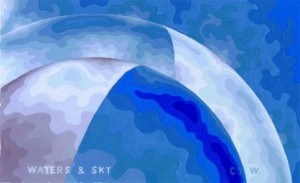 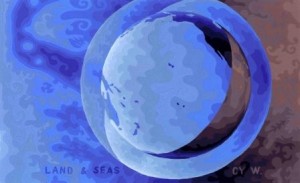 Next God moved the waters to allow dry ground to appear — thence land and seas. 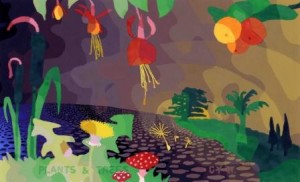 God made life, plant life in all its glory. Curious that the heavenly lights were still not in place, but at least they had the light that was created on the first day. 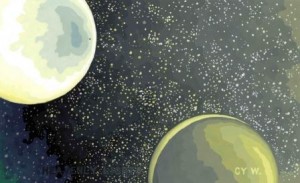 God made the stars and the planets. They have indeed served humankind well as signs. For example the ancient Egyptians knew exactly when the Nile would flood their fields. 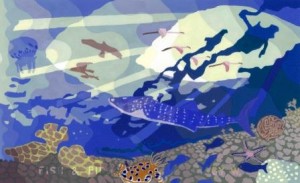 Then God attended to two very different environments, the waters and the air. To frame the birds and the fish in one view I chose an underwater view looking up. 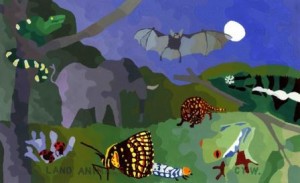 Next God populated the land with a panoply of animals. Not all of these creatures would be active at night — a piece of artistic licence.

I interrupt the creation account with a ‘Journey to the Sun‘. Here in the outer reaches of the solar system, with Pluto, Neptune and Uranus, the Sun is very small indeed.

The Sun grows in size and brightness as it successively shines through Saturn’s rings, peeks between Jupiter’s, and then puts Mars into the shade.

Earth, Venus and Mercury pale in comparison to the Sun’s expanding glory in which prominences leap from its surface. The zit on the Sun’s face is Mercury. 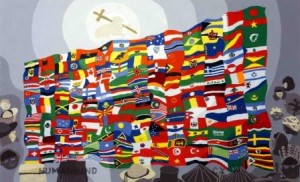 Returning to the creation account, God made people. The flags and the headgear represent humanity in all their variety. The ‘Agnes Dei’ or ‘Lamb of God’ at the top represents Christ, the Light of the world.