I realise these are late for the day, but they make good Mothers’ Day gifts, too.

You can see larger images, as well as the original works of art, in Galleries, Valentine Hearts; or click on this link: http://www.cysarts.com/?page_id=1565.

The Secrets of the Style (1)

My painting style has been described as semi-representational. Is my art thereby praised or pilloried?

The prefix ‘semi’ concedes that each of the elements imperfectly represents something – but what? I hope to answer this question in part one today.

The elements taken together convey an impression or a message that is not always obvious at a glance. I hope to explain this in part two next week.

Part One: What does each of the elements represent?

1. The basic pattern in ‘Amoeba’

The basic wavy pattern was inspired by an image I saw on a TV programme called ‘The Tomorrow People’ way back in my early teen years. I played with curves and gradual change of colour. Each colour was applied one at a time. The result in this painting is an impression of an amoeba moving to explore its environment. 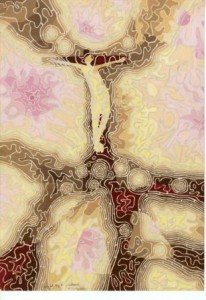 I added shapes to represent in simple outline human figures and the cross. By staggering the application of colours the figures can be made to stand out sharply or subtly. The wavy pattern is more complex producing a flowing effect. The added shapes interact with the flowing wavy pattern to produce an impression of agony and grief.

3. Background effects in ‘Amoeba’ and ‘Spacegate’ 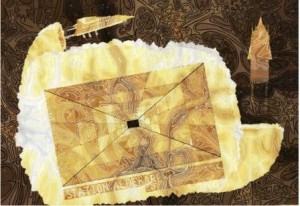 I played with the background. In ‘Amoeba’  I first applied a faint wash just like the wash used to paint a sky in some watercolour paintings. Then I drew the pattern on top of the wash and painted in the colours.

In ‘Spacegate’, I painted in the background afterwards to offset the darkness of space from the brightness of the other objects.

4. Repeated superimposed images in ‘The Sun’

Five overlapping suns shine in the complete painting. The boldest image shows the sun at the present moment; the fainter images show the sun moments before the present. Together, these images convey the sense of the sun moving through space.

5. Mathematics in ‘The Sun’ and ‘The Solar System’ 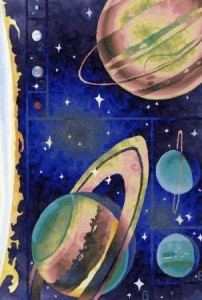 In each of the suns there are several circles to represent the sun’s roundness. The circles are set at exact 15-degree intervals.

Painting spheres in all their 3-D glory became something of an obsession. In ‘The Solar System’ I manipulated the wavy pattern. I used similar circles to those seen in ‘Sun’ to guide the degree of squeezing. The guide circles are not visible in the finished painting. At the edges of the spheres the squeezed pattern conveys a sense of seeing the surface nearly edge-on.

6. The Beginnings of a Message in ‘The Earth’ 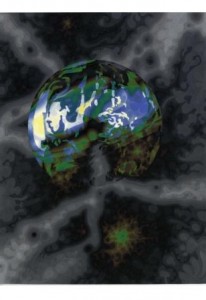 In most of my early works I was playing with colours and patterns to discover what interesting images could be created. Aside from ‘Crucifixion’ with its clear themes, I had no intention of conveying a deeper message. I painted just for the fun of it.

After finishing ‘The Earth’  I noticed that the planet appeared to be leaking. It was an accidental effect that led me to think about this more serious side to painting. That was way back in the 1980s just before ‘global warming’ became a part of the global lexicon. More in part two….

Part Two: What messages am I trying to get across?
Illustrated by recent works